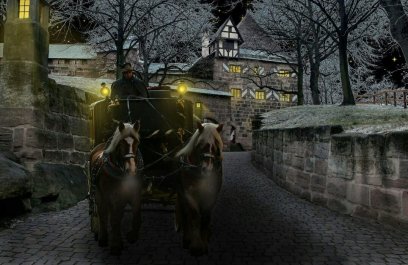 Malcolm the butler didn’t mind taking over carriage duties once again for this evening, it meant that he got to leave his dull manor job for yet another night out. Normally, this was Phillips the coachman’s job to do but, he had recently abandoned his duties. It had been days since anyone had seen or heard from the man. The horses slowly trotted   down the cobblestone bridge as Malcolm guided them as best as he could being merely a beginner at this. He breathed in the night air, enjoying its freedom away from the stuffiness of Kensington mansion. Darkness surrounded the carriage as it proceeded away from the estate grounds and unto the long country roads towards town. Only the silence of an empty night could be heard under the sound of clopping hooves and rickety wheels.  Malcolm kept his eyes focused on the dirt road ahead of him when he saw something off on the side.  It was a man, waving his arms for Malcolm to stop the carriage.  Malcom pulled up on the reins, bringing the horses to a complete stop.

“Phillips, is that you?”  Malcolm said as he recognized the man to be the missing coachman.  He looked perfectly healthy and dressed ready to come back to work.

“Malcolm! My dear fellow, yes it is me, Phillips. Might I get ride from you back to the manor? It’s quite cold out here and I’ve been lost out here for some time”

“Of course, of COURSE! We’ve all been quite worried about you. Climb aboard, now”

Phillips climbed up the side of the carriage and sat next to Malcolm, who proceeded to motion the horses to get moving again.

“Well, I’m certainly glad to see you, Phillips. Good to see you’re safe, at least” Malcolm’s breath hit the cold air with a puff of frost.

“I’m glad to see you too, Malcolm” Phillips said, as he turned to look at where he was sitting. “There is just one problem”

Malcolm looked over at him away from the road, with a confused look.

“See….you’re sitting in the wrong seat. That’s MY SPOT”.

As Phillips finished his thought, he curled back his lips and lunged towards Malcolm. It didn’t take long for him to plunge his bite into the open neck of Malcolm and drain him dead. The horses stopped moving as Malcolm’s grip reflexively pulled on the reins in his now lifeless clutches.

Written for the Genre Writing Challenge #2 and the Story Starter Challenge prompt.