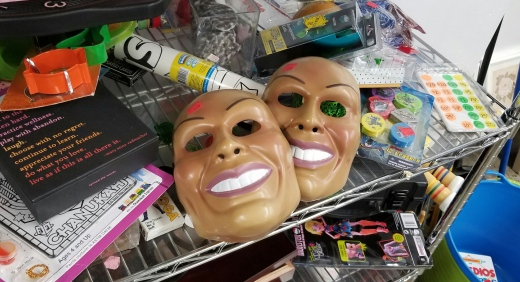 This was to be a big step for Maggie Durant. After repeated attempts from friend Karen Stantz to get Maggie to leave the house, she finally compromised. It had been close to a year since the incident and Maggie knew Karen was right in the timing.

“You have to LIVE, Maggie. You can’t have THEM make you a prisoner”. Karen’s simple and accurate words still echoed through Maggie’s mind. Then again, it’s was easier to state such things when you weren’t the one who was assaulted.

One night last October, Maggie came home late from class and discovered that her normally vacant house was now occupied by two complete strangers. A man and a woman wearing masks had broken in and were silently waiting for her. The next few hours proceeded to be a series of horrendous assaults on Maggie that she miraculously survived from. Eventually the couple left Maggie’s house, presuming that she was dead. No arrests were ever made and the case remains open.

One year later, Maggie has a limp in her left leg from when it was smashed with a hammer and a shattered mental state that will never heal. She moved out of that house (her childhood home now forever stained) and got a new apartment on the outskirts of town. This turned out to be both her safe haven and prison. She dropped out of school, got a job working from home and had all of life’s necessities delivered to her. Karen was her only social contact and was the only one allowed to physically be near Maggie’s presence. Karen was a compassionate childhood friend who loved Maggie like a sister. Her intentions were truly to just get Maggie to go out of her apartment and back into to the world. She wanted to take her to a store-ANY store.

Karen took Maggie to ‘Second Helpings’, a charity donation thrift store. It was a small and safe place, easy for people to browse and be watched over. Sometimes, the store was known to have some “treasured trash” in the ways of glassware or even some classic vinyl albums. Karen knew Maggie used to love vintage colored glasses and thought maybe she could rebuild the collection she had that was smashed by the couple during the assault.

Both women walked through the store, separating at one point between used small appliances and well-traveled luggage. Karen never let Maggie out of her sight, only occasionally looking away to go through shirts on a rack.

It was during these moments when Karen was holding up a blouse that the screaming begin.

Karen immediately ran over to where the screaming was coming from, recognizing it from many of shared past flashbacks. It was Maggie’s. A few other shoppers and employees were now rushing over to where Maggie was standing. Karen grabbed by Maggie by the shoulders and spun her around. Her face now bone-white and her eyes filled with tears.

“MAGGIE, WHAT IS IT? WHATS WRONG?” Karen stared into Maggie’s chaotic eyes to try to get her to settle down. Maggie nervously glanced down at a metal shelving unit standing in front of her.

She choked on some words but finally managed to whisper out , “T-they were here. In this store”.

Karen looked down at the shelf and knew right away what Maggie meant. Laying there among some old crafts and party decorations, sat two plastic masks. The same two masks that Maggie had described to her and police dozens of times. Karen looked closer at them and saw that they even the same distinguishing marks on them that Maggie vividly described. This was easy for her, considering she stared into these masks, inches from her face for some very long, painful hours.

The couple that assaulted Maggie apparently decided to make a charitable donation.

Karen held Maggie by the waist and quickly escorted her out the store. She got her settled down in her SUV and then made a call to the police hoping to finally put an end to the screams from her friend’s past.